You know the origin story of our bee-loved mascot and the origin story of Filament Games itself. But what’s the story behind our recent release, RoboCo? At Filament, creating, designing, and breathing life into meaningful educational experiences is what we do best. Just like our other games, RoboCo started as an idea and then grew into the robust, educational STEM game it is today. We’re not even finished yet – there are still many features to come. However, the good news is that you can download RoboCo on Steam Early Access right now!

Today, our VP Brandon Pittser joins us on the blog to tell us all about the origin story of RoboCo. As he says, it’s been a long roboroad! We couldn’t be prouder to share this game with you, and we can’t wait to see all of your robocreations.

RoboCo just released last week, and I’m feeling a bit nostalgic. It’s been a long roboroad, friends. We started dreaming this dream all the way back in 2016 – a bygone era of Snapchats, athleisure wear, and fidget spinners. Now a week into the game’s Early Access release, I think it’s time we looked back on the many evolutions of RoboCo over the years. Here is a brief timeline of RoboCo history:

Having successfully landed a Phase 1 grant from the National Science Foundation’s (NSF) Small Business Innovation Research (SBIR) program, or NSF SBIR program which is much faster to type, we set out to create a robotics experience that could be played on the HTC Vive and Oculus Rift headsets.

These were the first viable mass-produced consumer-level high-fidelity VR headsets on the market, unless you count the Virtual Boy, to which I say: fair point. Our working name for that early version of the game was RoboEngineers, because as an educational game developer par excellence, we naturally wanted to infuse the game with authentic STEM learning opportunities and real engineering design thinking. 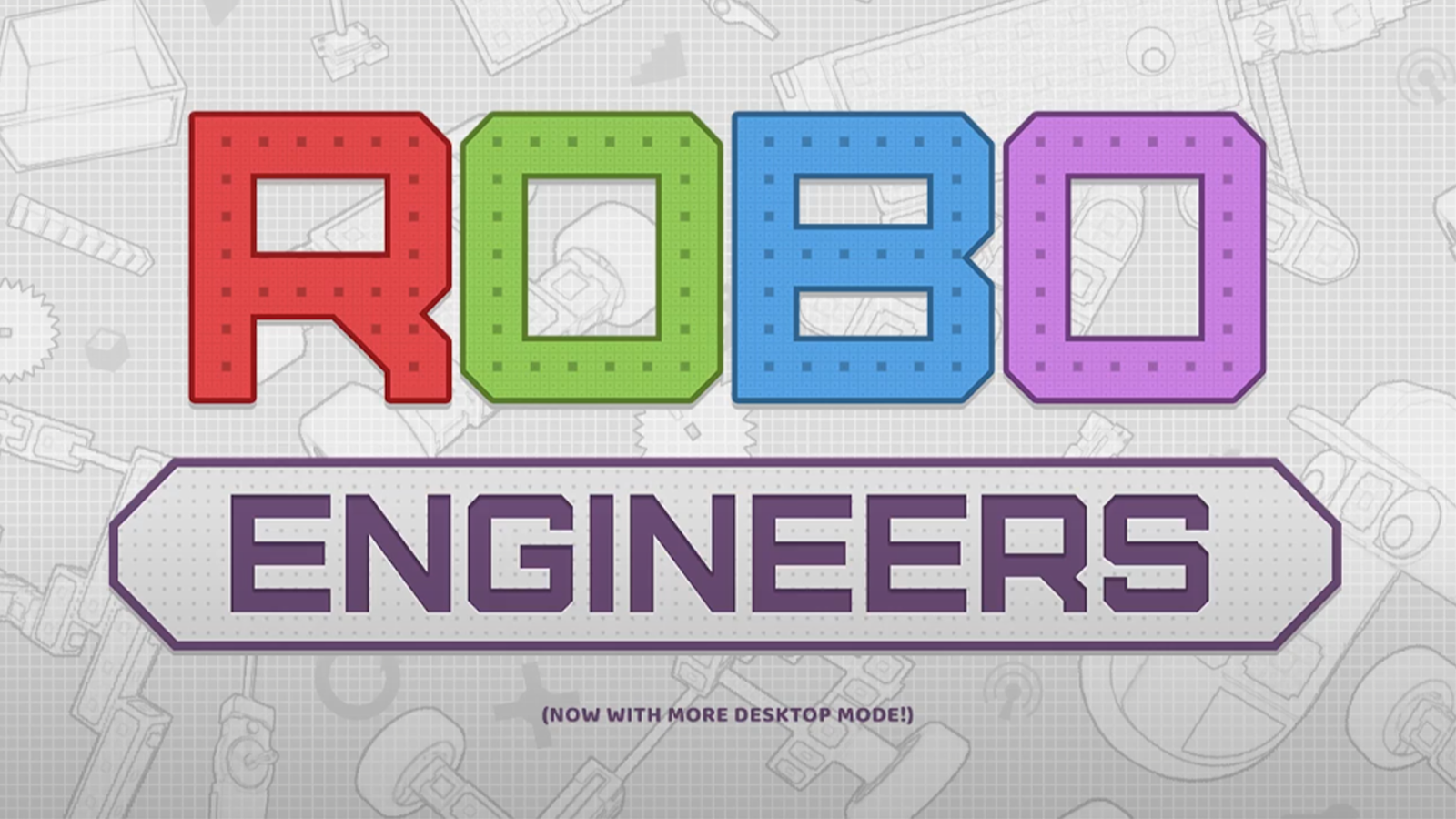 Just like real engineers, we created a prototype and iterated extensively, starting with RoboCo’s pleasingly snappable parts, and moving on to stretching and resizing, active / edit modes, a laser pointer to help with VR precision, part detachment, joints, rods, motors, transmitters, and even some early robots.

We also experimented with some early audio and challenge courses, a concept that would later evolve into the challenge levels that constitute our campaign mode today.

With a prototype in hand, we took the next natural step – pitching publishers! In preparation for the pitch sessions, we dialed in the game hook and the overall feel of the gameplay, experimented with different paradigms of play mechanics, and even started adding basic human characters and interactions. We were super excited to show off our game and find the perfect publisher!

Narrator: They did not find a publisher.

As it turned out, we were a bit early to VR for publishers – with a lack of mainstream consumer adoption, VR hardware still felt like too much of a gamble to invest substantially in VR content. Sometimes, an idea is just too visionary. But we were not deterred! As I mentioned earlier, our work was funded by a Phase 1 NSF SBIR grant, which means that we were eligible to apply for a Phase 2. Thanks to the herculean grant writing strength of Filament Games CEO Dan White, we successfully landed the second phase of the grant and moved on to creating a Desktop mode for RoboCo which would strengthen our publishing position and our offering for educators.

During this phase, we started working on a Desktop mode, which involved translating our user interface to 2D and figuring out how to accommodate mouse and keyboard inputs – a massive departure from the previous VR controller input scheme.

We tested various aesthetic approaches, played with a few versions of IK legs, established a basic structure for challenges, and even experimented briefly with jumping human babies (which can be seen on the earliest posts of this very devblog) that have all since been moved to a safe daycare far, far away from RoboCo HQ. 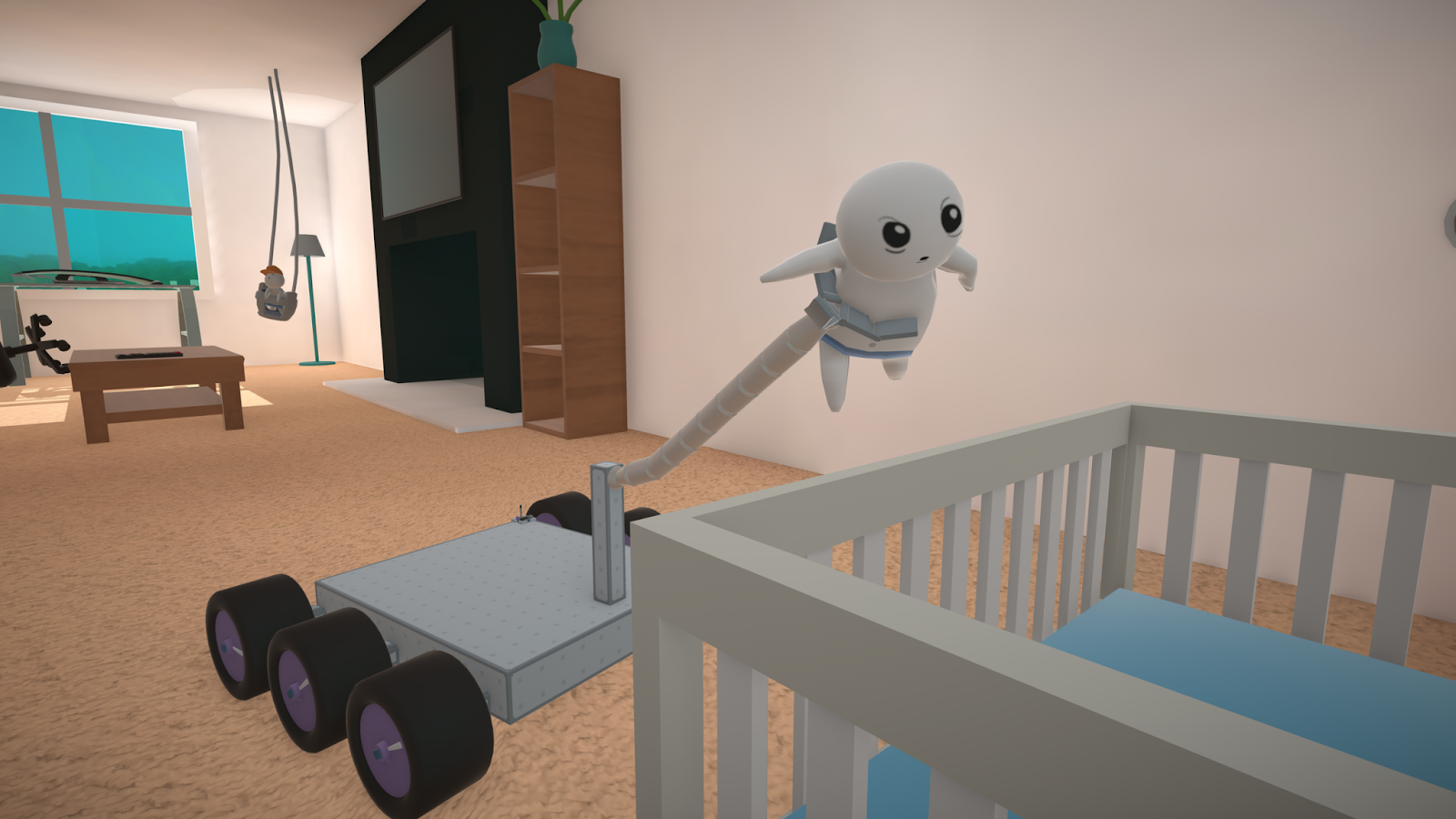 “Put the Baby Back in Its Crib” Challenge

The NSF Phase 2 Funding started to kick in in June 2018, and this Phase was substantially longer than Phase I, so this development cycle lasted all the way into late 2020. During this time, we added more 3D artists, more engineers, and started to prototype our current set of challenges. We also picked a new brand name – RoboCo! 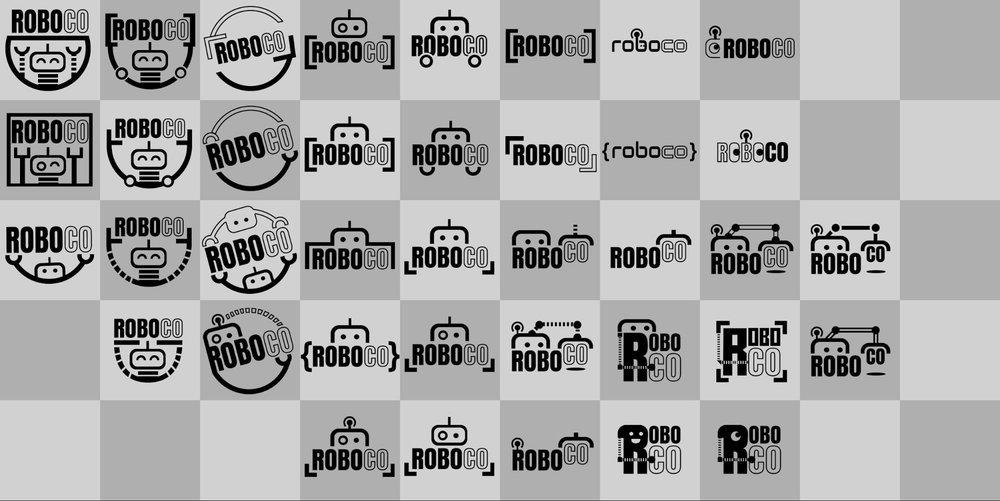 Past Iterations of RoboCo Logos

Our art style also really started to solidify at this point, with a special emphasis on bringing life, humor, and charming clumsiness to our human characters. This was accomplished in part by bringing more Rulescript into the experience, allowing us more granular control over human behaviors.

Content creators like ScrapMan, kAN Gaming, and Durf started playing with RoboCo and shared it with their audiences, and tbh we loved to see it. The building tool started to expand with more part manipulation abilities, and we experimented with different forms of challenge level scoring. During this phase, we also developed RoboCo’s iconic Bistro level, where over 1 million sandwiches have been served at varying degrees of service quality. This level formed the demo we brought for our first public-facing event: PAX 2019.

Our experience at PAX was incredible – countless cool people came through our booth to make countless cool robots, and we couldn’t be more pleased with the results. As mentioned, our demo had players playing the Bistro level, building a bot that could convey a sandwich from one side of a restaurant to another, but the way the player went about it was up to them. We saw clawbots, carts, cranes, and even one catapult! The creativity and ingenuity on display was really exciting – we designed the game to allow for lots of solutions to every challenge, and it was super satisfying to see players come up with ideas that we had never anticipated. 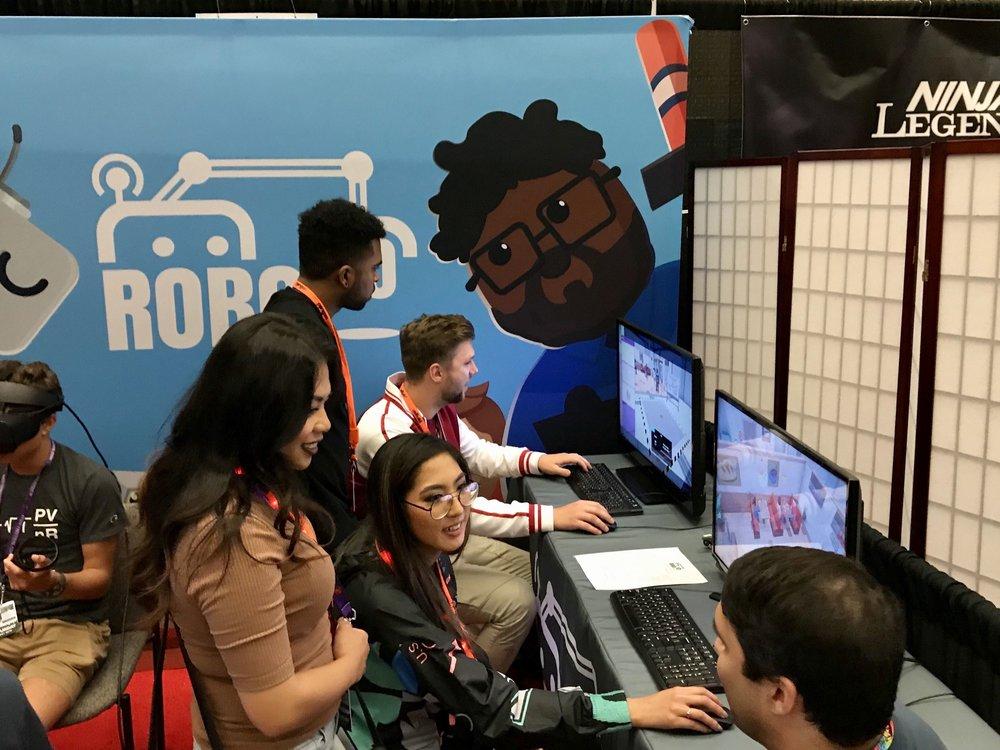 PAX also equipped us with two things to take back home to Wisconsin; namely, sore throats and a massive infusion of user feedback. In-booth input and surveys from players helped us refine our building tools, start experimenting with more part manipulation tools, and focus our efforts on the much-requested and badly-needed Undo feature! We also implemented a physics overhaul to bring greater fidelity to the physics-driven behavior of objects in the game, added more challenges, polished existing challenges, and started adding a ton of new art assets.

From here, we geared up for a Closed Alpha playtest in 2020. As part of our NSF funding, we’re required to do rigorous testing and research about the funded project, so that we can ensure we’re delivering on the educational outcomes we promised to the NSF! Working with our partner WestEd, we had hundreds of players from both K-12 schools and our Steam community run through the levels of the game, providing even more valuable feedback and confirming a lot of our design hypotheses. The Closed Alpha gave us the design ammunition we needed to update challenges, refactor our humans (known internally as the smartening), and solidify our Undo feature. We were basically ready to launch into Early Access at this point, but then something crazy happened…

Thanks to an introduction from our good friends at REV Robotics, we formed a collaboration with FIRST in early 2021 which extended and strengthened our development runway. In our original proposal to the NSF, we specifically mentioned that the digital robotics experience we envision is inspired by programs like FIRST, which is having a profound impact on young people, helping them launch positive career trajectories and make connections that will last a lifetime. To be collaborating with FIRST on RoboCo brings our vision full circle: more than ever, we were positioned to bring digital robotics to people all around the world, with the credibility and prestige of the FIRST brand at our side. The collaboration with FIRST allowed us to add some key features that dramatically expand the game experience – namely, new scoring features around time and cost, a much-requested Programming feature, part painting to customize robot aesthetics, Steam workshop sharing, RoboRepair tutorials to introduce basic game concepts, and context and HUD tips that improve quality of life across the board.

The collaboration with FIRST also opened a lot of doors for us, and we’ll have much more to say about that soon. 👀 For a glimpse of the future where digital robotics facilitate exciting tournament-style competitions between real robotics teams, check out our FIRST Global RoboCo Challenge recap here.

As you can tell, we’ve come a long way from our humble beginnings. In October 2022, we released the official launch trailer for the game, and on November 3, 2022, RoboCo was released on Steam Early Access!

Hope you enjoyed your robohistory lesson! Now, what are you waiting for? Harness your creativity and go build the robot of your dreams. Download RoboCo today!

Looking to create an impactful STEM game? We’re the educational game developer for you!

Whenever we start a project, it’s pretty common for us to not have a formal finished pitch. Early concepts and proposal aside, there is still a giant gap between “here’s what we’d like our users to know” and “this is what the game is like”. It’s nuts! We love it! Years ago, Matt Haselton and I…

I recently delivered a talk at the National Science Teachers Association entitled “Engagement Unlocked: Using Learning Games for STEM”. I began the presentation by disavowing the title because it suggests that, up to this point, engagement has been locked up and inaccessible in schools. That’s obviously not true. Yes, I remember having to memorize the…

No matter the player’s age, game platform, or subject matter, digital games have the power to effortlessly immerse players in complex problem-solving for long stretches of time – making them ideal for engaging young learners and teaching key 21st century skills. But did you know that game-based learning can lead to enhanced learning outcomes for adults,…