Every game teaches you how to play. Plants vs. Zombies is an interesting case study because it made “hardcore” strategy content accessible to casual and non-gamers. Before Plants vs. Zombies the game industry had falsely concluded that the casual market just wasn’t interested in certain game genres. In addition to appealing to casual gamers, it avoided alienating the veteran gamer audience. George Fan admits that there are many elements at work to achieve this kind of mass appeal, but credits most of the success to where he spent most of his time – how his game presented learning.

Here is the video of his 2012 GDC talk, as well as a summary article, and the link to the game. The following are George’s rules with my own Filament Games specific educational game commentary.

1) “Blend the tutorial into the game”

If you give players the option, they will almost always skip the tutorial. As I explained in How to Design the First Five Minutes of Your Game, there are a lot of bad tutorials out there. The gaming audience would most likely describe a tutorial as “that part of the game before you get to the fun.”

This concept is a call to action: stop thinking about the tutorial as an isolated part of the experience. The goal is for the “learning of the game” to blend so seamlessly into the experience that players can’t tell where the tutorial ends and the game begins – or if there is any tutorial at all.

At Filament Games we strive to integrate learning throughout our games. We accomplish this by unifying the fun and the learning into the gameplay; as opposed to a model where fun and learning are compartmentalized and the game part is just viewed as a reward.

There is a trade off between games and text as mediums to convey information. Text is information dense and easy to create; however, doing things is more fun and memorable. We will be the first to tell you to avoid games if your content is more effective to teach with another medium. As we have discussed in other articles, games tend to be the best solution for deep mastering of a few focused concepts.

Game developers refer to what actions you can take in the game as the game’s “mechanics”. Filament strives to marry learning objectives with the game’s mechanics – this is how we create experiences that are both engaging and educational.

3) “Spread out the teaching of the game mechanics”

The more a user is engaged and invested in an experience, the more willing and receptive they will be to spend time learning. It is counter-intuitive, but if you start with a tutorial that demonstrates the bare minimum to get started, then patiently and gradually add more knowledge, the experience will be dramatically more effective in its educational goals.

The essence of this rule is to guide someone through an action thereby motivating them to perform the action for the first time. I don’t have much to add here other than blinking lights and animated arrows are by far the most efficient means of communicating action – wherever Fan could, he preferred this to text. 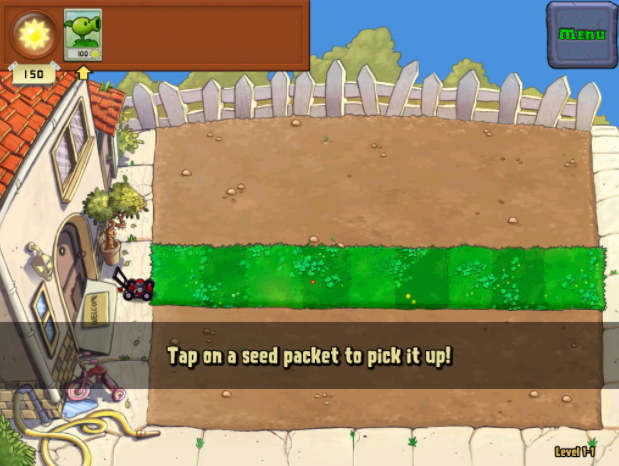 Fan’s rule was “there should be a maximum of eight words on the screen at any given moment”. Remember, this is advice for tutorial text; narrative text is a different story.

There are a number of reasons why brevity is king:

6) “Use unobtrusive messaging if possible”

Fan resisted the urge to pre-emptively tutorialize and avoided explicit direction as much as possible. Instead he favored hints and gave the player a chance to explore and discover. Adapting and reacting to the needs of the player is how Plants vs Zombies could support new gamers and avoided frustrating seasoned gamers. As soon as a player feels smarter than the tutorial they will stop listening.

Scaffolding several layers of hints is a bit more work as developer, but from a user perspective it minimizes how much of a tutorial they have to experience. Measuring how much scaffolding a player needs is also a great metric for assessment.

Whatever methods you have to communicate with the user, make sure that tutorial text is always immediately relevant and focused. If you pollute your communication channels with jokes, backstory, or character introductions you risk setting yourself up to be ignored.

Fan talked about how they experimented with the “Crazy Dave” dialogue box as the vehicle for his tutorial. There were two main problems with this idea – the first was that it required extra steps to introduce the character, and the second problem was using one system to express information of radically different importance. Even though we have a goal to blend the tutorial into the game, I’d recommend one system purely for tutorial communication.

The stronger your visuals are the less teaching you will have to do. You should able to look at game objects and quickly establish what function they have in the game.

My one educational game commentary for this rule is, depending on the topic, having the art of your game “read” well can be more important than rigidly pursuing realism.

Players bring into the game space all of their previous life experiences. For example, it is practically common knowledge that zombies are dimwitted and slow moving compared to the average human, so you do not have to teach that to players.

Every game has its own unique challenges, and the way that Plants vs. Zombies solved its specific problems may not apply to all games. For example, educational games can rarely afford to spend the multiple hours it takes to complete adventure mode in Plants vs. Zombies – that is very time-inefficient learning.

I’m sure that you have noticed some of George Fan’s rules interact with each other. I believe most of his talk was building toward the universal and powerful compound idea to communicate passively with clear and concise scaffolded hints. The most important rule for educational games is that the most effective place to teach is in the middle or towards the end of a game, after the player is engaged and invested in the experience.