If you were in San Francisco, California last week, you may have noticed an extra 30,000+ people wandering around the downtown area (myself included). These folks were most likely there to attend the annual Game Developers Conference (GDC), a revered professional game industry event for developers, publishers, and academics alike.

A little more context for those unfamiliar with the event – GDC is weeklong occasion where game developers from all over the world gather to attend workshops and talks, demonstrate their upcoming games, and connect with potential employers, publishers, and collaborators. At its heart, however, it’s a professional and playful free-for-all, celebrating the talent and accomplishments of the industry we all know and love.

This was my second time traveling to GDC, and while I’m still a newbie by industry standards, I thought I’d share some of my biggest takeaways from this year’s conference. Let’s jump right in! 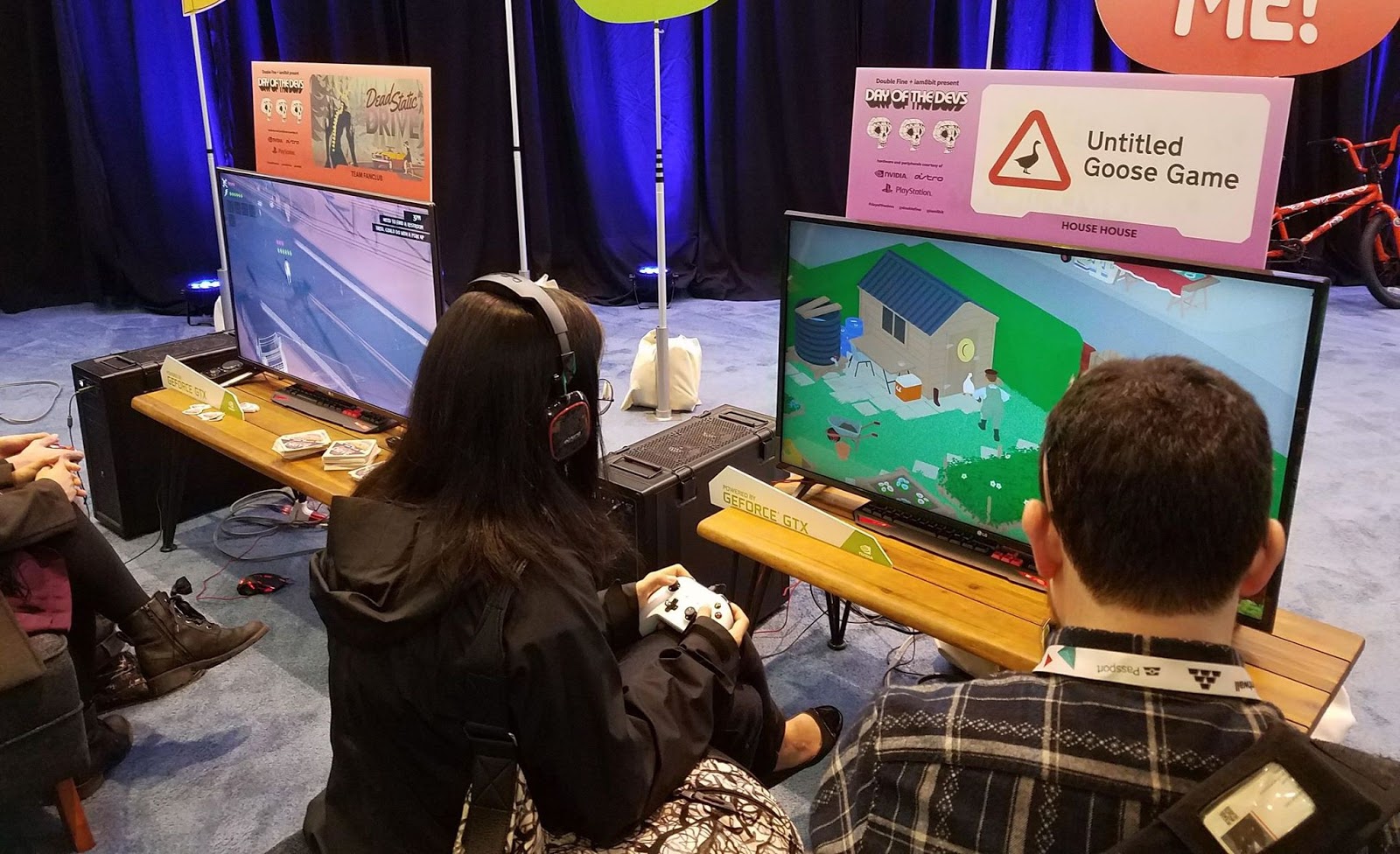 I’ll be the first to admit that I’m no Bitcoin, cryptocurrency, or blockchain expert, however those in attendance at GDC 2018 had almost no choice but to become closely acquainted with the technology and its growing relationship with the gaming industry. While traveling between buildings, various blockchain startups and organizations had paid representatives dotting the streets, handing out flyers and advertising their blockchain-powered products and services. It slowly became a joke between con-goers, as we found ourselves comparing our giant stacks of blockchain flyers that each of us had accumulated throughout the event. Blockchain’s overwhelming presence at GDC sparked new conversations about how the technology intersects with the video game industry. Could we harness the power of this technology to improve our games? What are the potential risks or shortcomings? I look forward to learning more about the technology and continuing these conversations with fellow developers in the coming months.

While retro-inspired pixel platformers and roguelikes having dominated the indie game market for years now, we’re starting to see the rise of a new trend: games featuring low poly animals and creatures. One of my favorite events at GDC is iam8bit and Double Fine’s Day of the Devs, which showcases some of the most promising up-and-coming indie games the industry has to offer. Last year I was introduced to Ooblets, an adorable Pokémon meets Stardew Valley game featuring cute creatures that players can train, explore the world, and battle with other trainers. Though in my opinion, Untitled Goose Game stole the this year’s show. In it, players assume the role of a goose who must annoy, cajole, and sneak around a gardener in order to solve puzzles and explore the world around you. It’s still early in development, but it seems to speak to a larger desire among audiences for brighter, cheerier, and more playful indie games. You can check out some pre-alpha gameplay below- I can’t wait to get my hands on a copy when it releases later this year!

Self-care isn’t a new concept, however it did seem to be an especially big focus at this year’s GDC. The idea of self-care in the context of gaming can mean several things, ranging from games that promote personal care to creating sustainable practices to counteract gaming’s sometimes questionable labor practices. Developer Brie Code in particular strikes me as a self-care leader among other game developers. Known for her push for more games that use tend and befriend, Brie strives to create games for non-gamers, most recently focusing on the idea of putting the self before stressors and removing oneself from toxic situations. This idea was especially prevalent at GDC, with con-goers given more options than ever before to attend low-key events with a focus on relaxation, human connection, and alcohol-free interactions. Pixelles and I Need Diverse Games hosted a quiet tea party for attendees before GDC, while The Deep End Games’ Amanda Gardner gave a talk focused on meditation and yoga and its use in the midst of crunch. It was truly exciting to see how a new emphasis on self-care events helped create safer spaces for people of all backgrounds attending the conference.

Want to learn more about GDC and perhaps even attend next year’s show? Check out their official website for the latest conference news and updates! And while you’re still here, feel free to peruse some of our other conference-related content:

I’ve recently had the privilege of participating in a number of game-based learning events for youth in the Madison area, namely through Spring Harbor Middle School and the Madison Urban League’s Spring Break Gaming and Coding Day at the Madison Central Public Library. Both events were aimed primarily at middle schoolers, with the library event inclusive…

They say all good things must come to an end – and it seems Game Artist Natasha Soglin’s tenure at Filament is no exception to that rule. After 7 incredible years, 16 amazing speed sketches, and countless cherished memories, Natasha has transitioned out of her position at Filament and onto her next role at fellow…

As the holiday season hastily approaches and the spirit of giving fills the air, we wanted to highlight some simple ways you can play an active role in improving your local school community. No matter the size, location, or funding of your institution or district, it is likely they would joyfully welcome additional support from…