In episode thirteen of the Filament Games Podcast, we sit down with the newly “doctored” Caro Williams-Pierce to learn about the intersection of math and games. We also talk about math in other dimensions, surfing atop a flying kite, and the intricacies of being a brain in a jar.

Hot Topics in This Week’s Episode 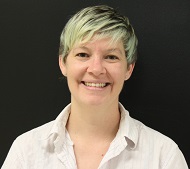 Dr. Caro Williams-Pierce is an assistant professor in the Educational Theory and Practice Department at the University at Albany, SUNY, and received her PhD from the University of Wisconsin-Madison in Mathematics Education. Caro specializes in designing and analyzing technology for mathematical play, with a particular focus on how players construct mathematical understandings through playing video games. In her research, she considers principles of embodied cognition, perception as a mechanism for grounding mathematical understandings, the role of productive failure, the player’s experiences when embedded in digital media, and the oft-missed playfulness inherent in mathematical problem solving.