Today we’re highlighting the release of an all-new game created for our longtime partner Junior Achievement: RoboSellers, an economics and entrepreneurship learning game that teaches about the role of money in everyday life.

In the game, players take on the role of a space-faring entrepreneur tasked with traveling between alien worlds, buying and selling robot parts on foreign planets, and growing their custom robot business. As players explore the galaxy in search of rare inventory to sell for profit, they are introduced to key economic and entrepreneurial ideas like evaluating costs and value, the implications of spending and saving money on a business’s bottom line, and the role of money in everyday life. RoboSellers is free to enjoy on Junior Achievement’s official website, with iPad and Android tablet versions also available as a free download on their respective app stores.

To celebrate, we sat down with some the developers behind the game for a behind-the-screens glimpse into the making of RoboSellers. Check out their exclusive insights below:

“The most challenging part about this project from an art perspective was creating interchangeable robot parts for building your own robots. Since there were 6 kinds of robots with 4 parts each that could each come in 6 different colors, there were a total of 144 parts – which is a lot of parts to make. To help make them faster, I used a lot of vector parts and masks since those are a lot easier to recolor. I made a color chart to make sure I didn’t forget any parts and to make sure all the colors worked together. In the end it was worth it, because being able to customize your own robot was a really fun and engaging part of the game.” 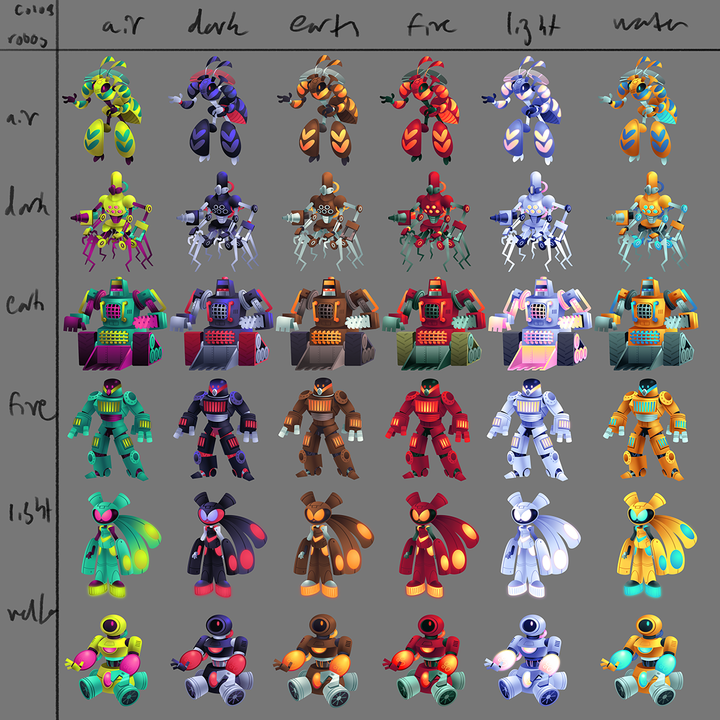 “One of the best things about Robosellers was the massive amount of user testing that Junior Achievement accomplished during the project. JA reached out to kids all over the world and got their input about the gameplay, artwork and even the title of the game. I even needed to design a new type of feedback compilation documentation to accommodate the diversity of feedback. It’s thrilling to get real user feedback on any project that we work on, and JA got us feedback at a global scale that we were able to use to make a great game even better!”

“How do you tell if sentences in a game match the sentences provided by our Arabic translator? Sound straightforward, until you need to verify 100 word and phrases that read right-to-left where the fonts in the game look to be completely different than the fonts used by the translator. Props to our QA Analyst Georgia who “learned” enough Arabic to find misplaced words and other typos in the game!”

“Translated into 13 different languages, RoboSellers was one of our more ambitious localization projects. It posed a number of interesting challenges but one of the of the big challenges for QA was testing through content in so many unfamiliar languages and scripts! Through this project I learned a lot about formatting and punctuation conventions, and languages that are read from right to left. I also became a LOT more familiar with languages that use different scripts such as Hebrew, Arabic, or Chinese. For me, working through these challenges was both fascinating and rewarding. It’s cool to think about how our game will be accessible to so many players worldwide because of our localization efforts!”

“I think the balance between making a game about finance and also keeping it easily digestible for elementary school children was an interesting challenge! We ended up minimizing a lot of text and emphasizing iconography which was a cool UX challenge. I think overall it was a success on that front. It helped for integration for the various languages we had to develop for too. Knowing a game you developed will be seen by people all over the world is an incomparable feeling!”

We hope you’ve enjoyed this inside look at the development of RoboSellers! Ready to try the game out yourself? Check it out on Junior Achievement’s official website, or download respective iPad or Android tablet version of your choosing.

Want to read more about our latest game releases? Check out the links below, then visit our portfolio for even more game-based learning highlights:

Creating a Coding Kit for Kids – An Interview with Publications International
iCivics’ NewsFeed Defenders: Game-Based News Literacy Learning
A Look Back at Our 2018 Game Releases

We’re obsessed with the intersection of VR and education – join us for a closer look at some of our most popular immersive learning resources!

Last year, we kicked off our partnership with Publications International in style by creating six VR experiences for their Virtual Reality Explorations book set – and they were an instant hit! ✨ One year – and a few other collaborations – later, VR Explorations is back with an all-new set of six books and accompanying VR apps: Food Science, How…

For many gamers around the world, summer 2016 was defined by the launch of Pokémon GO – San Francisco-based Niantic’s mobile AR megahit based on the #1 media franchise of all time. Much like the handheld games that preceded it, Pokémon GO challenges players to travel the world, capture and collect Pokémon, and battle fellow…