To celebrate the launch of Rainbow Agents at the New York Hall of Science and the Lawrence Hall of Science, we sat down with Game Designer Quinn Crossley for an in-depth look at the making of Filament’s first-ever museum game. Check out their thoughts below! ⤵

Quinn – kick us off by telling us a bit about yourself, your position at Filament Games, and the role you played in the creation of Rainbow Agents.

Howdy, I’m Quinn! 👋 I’m a coffee enthusiast, hockey player, and a real live Filament game designer. I’ve been working in the games space for about 8 years, and during that time I’ve focused my work on designing experiences for learning, healthcare, and social progress. Here at Filament, I work with clients and development teams to translate impact goals into exciting, effective games. As the game designer on Rainbow Agents, my job was to lead the design, development, and installation of Filament’s first ever museum game!

Give us the scoop on Rainbow Agents – what’s the game all about? What genre/style of game is it? What are the game’s learning objectives? Since it’s a museum installation – in which museums are the game available in?

Rainbow Agents is a cooperative programming game where players work together to tend a community garden 🌱. In the game, each player controls their own set of whimsical AI creatures who can plant and water plants in different places. Players direct their creatures by placing cards into templates called state machines, which represent CS concepts like loops and if/else statements. As players learn how to control each creature, they’re also mastering the CS content, which allows them to plant more plants and open treasure chests in the garden.The garden itself lives on a grid where all of the creatures can run their state machines simultaneously, which is a big metaphor for concurrent processing. 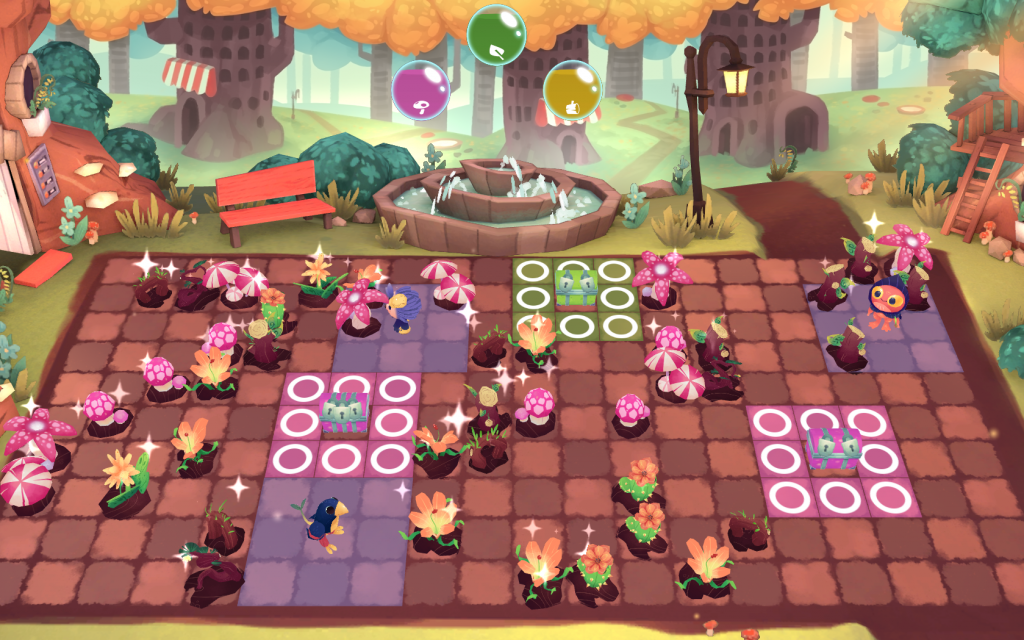 The primary objective of the Rainbow Agents project is a social one: to create a museum exhibit about computer science that specifically targets underrepresented youth. The game is designed to promote equity in CS education by helping girls and youth of color claim the identity of a computer scientist. Our goal was to create a welcoming, pro-social experience that illustrates a different perspective on what computer science can be. Rainbow Agents lives at the New York Hall of Science in Queens, NY and the Lawrence Hall of Science in Berkeley, CA.

You mentioned that Rainbow Agents was designed to be a pro-social game to appeal to youth of all backgrounds – what was the inspiration behind this decision? And what strategies did you implement to help make this happen?

Equity problems in education start at a young age. A lot of kids don’t see certain fields like CS as an option because it’s “not for them,” and they often don’t have access to the same opportunities and support as their more privileged peers. We wanted to help combat that by designing a CS education game explicitly with diverse needs in mind.

This was the primary goal of the project when the client came to us, so we got to focus on designing the game to be inclusive from the ground up. These considerations reached every part of the design process from how the exhibit was laid out to how the game works. From a game design standpoint, I focused on making the game cooperative, creative, and open-ended to make it as welcoming as possible. You can learn more about the specifics of that in my Inclusive Game Design article!

Tell us a bit about the process of designing a game intended for in-museum play. What were some additional considerations you had to keep in mind because of medium? What kind of custom hardware setup does the museum installation utilize?

Because it’s meant to be played in a museum setting, Rainbow Agents had a lot of design considerations that the studio hadn’t tackled before. We needed to build a game that could provide a fulfilling experience in under 10 minutes, accommodate a varying number of players and spectators, and run seamlessly on a custom hardware setup. And, all of this had to be built flexibly so that clients could modify and balance the game remotely without needing to update it on the museum floor. It was a tall order, but an exciting challenge for our team to tackle. 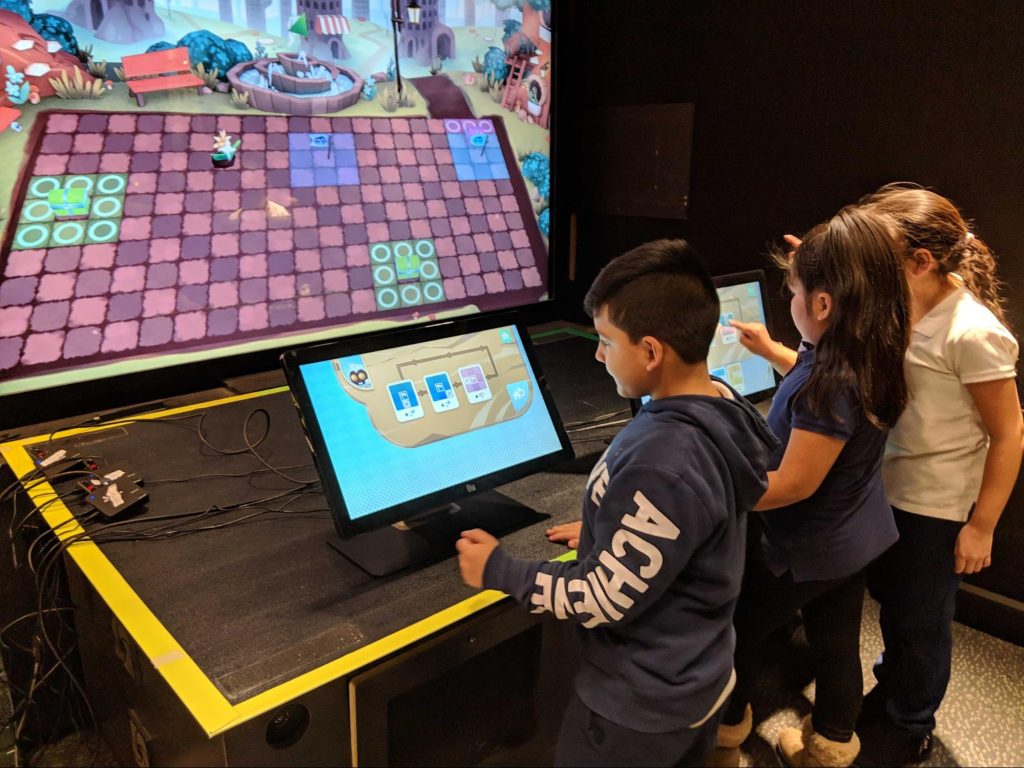 We ended up creating our own hardware setup for the game that utilizes three screens. When players see Rainbow Agents in a museum, they can control creatures from two touch screen kiosks and see the garden on a large, centralized TV. Both kiosks support multi-touch so varying amount of players can work together, and the TV provides an enticing view for spectators. We’ve been told our setup is working a little too well – people are so excited about the game in the lobby that they need a little encouragement to move on and check out the rest of the museum! 😅

Tell us a bit about the client behind the game – what were their motivations and goals for creating Rainbow Agents? How did their team support our development efforts?

Rainbow Agents was a collaboration between education researchers at the University of Wisconsin-Madison, the New York Hall of Science, and the Lawrence Hall of Science. Their goals are to research how different components of an interactive experience can influence interest levels in underrepresented youth. Although the game’s development is finished, the research team is just getting started – they’ll be configuring different versions of the game and testing them out for the next two years.

All of the clients did an amazing job supporting the team. They participated in everything from giving feedback on design, setting up Rainbow Agents at the museum sites, and even bringing their own kids into the office to playtest!

You mentioned that a big part of the project was creating tools to allow the client to balance/configure aspects of the game after development has concluded. Why was this important to the client? And what kind of neat gameplay possibilities does this tool allow for?

Since the clients are researchers, they need to be able to test different configurations of the game in order to figure out what gameplay components feel most inclusive and appealing. They’re trying to answer questions like: What helps players feel accomplished? What feels too alienating or complex? What prompts players to work together?

To help them answer these questions, we created two tools: (1) a data logging system that records specific gameplay details over time, and (2) a configuration spreadsheet that allows clients to remotely modify different components of the game’s balance. Clients can change all kinds of things like what creatures are available, how many different plant types there are, and what kinds of action cards players draw. This is really cool because it allows clients to test their research hypotheses through asymmetric gameplay. Will players work together more if they each have different plants? What if only one player can water things?

One of my favorite parts of the game is that you can trigger a special watering event by creating a biodiverse garden. It’s really fun to watch kids discover this part and see how excited they get about the animations.

Curious what the future holds for game-based learning? CEO Dan White shares his predictions in Part II of his Learning Games in 2030 blog series!

A new year has arrived, and it is time to prognosticate! Find out what we predict is in store for the world of edtech in 2020 (and beyond!)