Making software–any software, whether it’s an app on your phone to help you manage your finances or a game for the Playstation 4–is hard. Making good software that doesn’t drive your users nuts is harder because you have to pay attention to something called usability. People have brains, and brains have limits in how much they remember, what they notice, and how long they can pay attention; software is usable if it is designed in such a way that it conforms to those limits. Usable software is intuitive and effective for users to accomplish whatever task is at hand; unusable software is clunky, overly complicated, and confusing.

Digital games need to be usable, but they also need to be playable. It’s not enough for a player to easily navigate from one menu to another and interact with buttons that accomplish what players think they’ll accomplish; instead, games need to be engaging and fun on top of being usable. No one ever played Morrowind for its fabulous user interface (UI). (Though I can think of a few otherwise-fun games that are rendered unplayable because of their terrible UI.)

Game studios employ a technique called playtests. Playtests allow developers to test game usability–where are players getting stuck or frustrated?–in addition to finding out whether the game is fun to play. In Filament’s case, we also use playtests to measure the efficacy of our games as learning tools.

This all sounds very complicated, but conducting playtests is fairly straightforward if you know the questions you’re trying to answer and have a plan in place. Download our free Playtest Guide for tips, tricks, and worksheets to make the most out of your playtests! 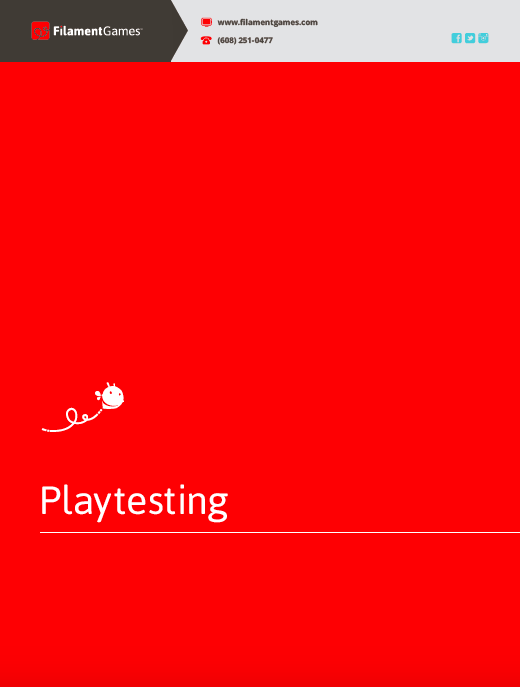 Want to learn more about VR for learning? CEO Dan White and VP of Sales Jennifer Javornik recently joined Games for Change for a live webinar to discuss insights gained from developing experiences across the full spectrum of VR. Using our two latest VR projects Breaking Boundaries in Science and RoboEngineers as illustrations, Dan and Jennifer discuss the unique affordances…

What better way to start the new year than with a new Speed Sketch! Follow along as Game Art Team Lead Natasha Soglin creates this this enchanting landscape. Natasha created this piece in 60 minutes to experiment with color palette and mood. Have questions for Natasha? Get in touch via Facebook or Twitter! In the mood for more Speed…