A few weeks ago, I had the privilege of serving as a judge for MadHacks, the Madison, WI chapter of Major League Hacking (MLH). MLH bills itself as the official student hackathon league, and rightly so! This event was serious business. MLH works with thousands of students on an annual basis, holding over 200 weekend-long invention competitions around the country that challenge students to make stuff. Fueled by energy drinks and catered comestibles, students from various backgrounds come together and pool their skillsets to solve a problem in a 30 hour marathon session, give or take a couple of minutes. It’s like a microcosm of the modern workplace (but with more brutal deadlines) and it represents the kind of experiential, hands-on learning that we love at Filament Games. Speaking of which, here’s what I learned.

I went into the competition with a few assumptions and expectations. For one, I assumed that I’d be reviewing mostly games content, and mostly simple games content given the time constraints. This was a safe assumption – the primary creative direction from the organizers was to make a game or at least something game-related. But I was only partially correct! What I did not expect is how broadly that creative direction could be interpreted. Students made all kinds of interesting things – an Asteroids clone, a predictive model for NBA games, a version of Super Mario Bros. that you can control with your face, and a banking app for Amazon’s Alexa, just to name a few.

Each judge was assigned a group of projects to review, and the judging process consisted of each group giving a small demo of their project to the judge. What I found most striking about this process was the diversity of the students – people from all backgrounds, interest areas, and academic disciplines were represented, which is likely why the submissions gallery is such an eclectic potpourri of clever solutions to interesting problems. In case you were wondering, the first place winner was a game called Lasagna, a hybrid digital/physical board game made out of cardboard, servos, and an arduino – it’s a really cool concept that needs to be seen to be believed:

There are several ways to participate in MLH. My route was to serve as a judge – if that’s what you’re looking to do, get in touch with the organizers of your local chapter and tell them about your qualifications. They’re generally looking for people who are at least loosely affiliated with tech, making, gaming, or whatever is most applicable to that competition’s objectives. Similarly, folks can also get in touch with local MLH organizers and apply to be a mentor. Mentors simply wander around the rooms where teams are working and offer them advice and guidance based on their areas of expertise. Filament’s own Arthur Low and Casey Arendt participated in Madhacks as mentors, and are pictured below. Look how happy they are! 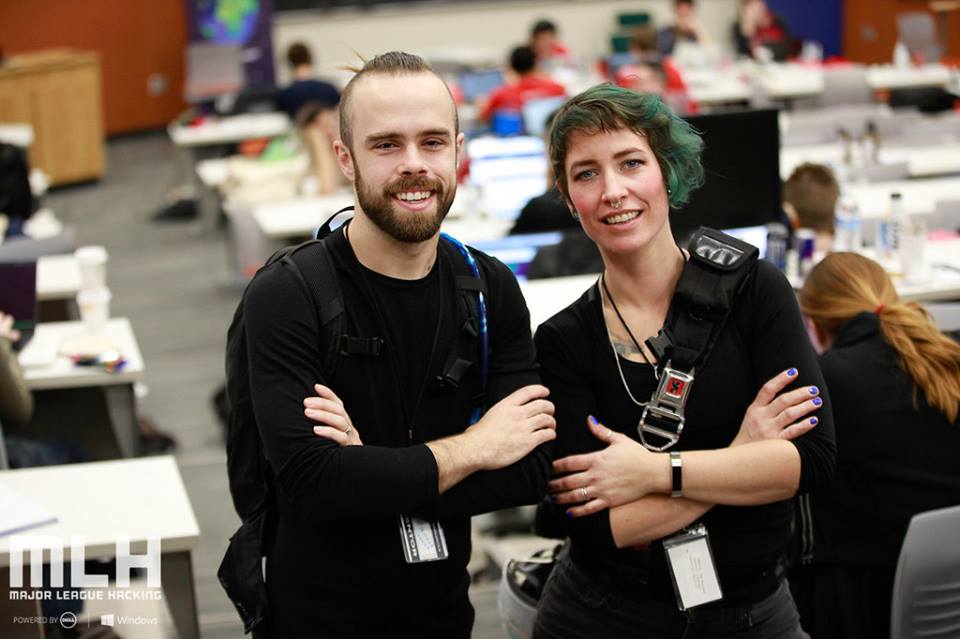 Become an MLH mentor so you, too can point authoritatively at a young person’s screen.

And of course, the most obvious way to participate is to compete! The competitions are geared towards college students, so you’ll either have to be currently enrolled or someone who has graduated within the last 12 months. That’s about it in terms of requirements. You don’t need to know how to code, or even have an idea ready to go. You just need to show up with an interest in technology and an enterprising spirit! In terms of where you should show up, here’s MLH’s list of upcoming hackathons. Check it out and see if there’s a hackathon happening near you, and if you do participate, let us know what you make!